The following feature is only available in the Pro Plus version of the plugin.

Pro Plus sites have the ability to give users awards for reaching defined goals. Currently you can set awards for:

From this screen it is possible to delete and edit existing awards as well as define new ones. 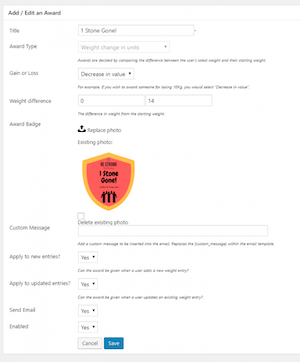 When defining an award, you have several options. As the image on the illustrates, you have the ability to specify the type of award, whether it is rewarded for a gain or loss in weight, a badge (image), a custom message (appears in emails), weight entry types that should be considered, whether an email should be sent and finally whether it is enabled.

How are awards issued?

Whether an award should be issued or not is determined when a user adds or edits a weight entry. The system starts by fetching all possible awards and filtering them down. Each award is then considered in the following manner. If each condition is met, then the award is issued:

If enabled at the award level and for all awards, an email will be sent to the user for each award issued.

Awards that have been issued can either be displayed via shortcodes (see the following selection) or by viewing the user's record in the WP Dashboard.

The following shortcodes can be used to render a user's awards:

It is possible to clear all awards assigned to all users. This will allow the award to be re-issued to the user on future weight entries. To clear previously assigned awards, navigate to “Weight Tracker” > “Help and Log” and click the button labelled “Delete all issued awards”.